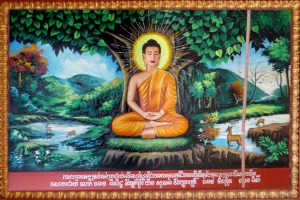 “The world, indeed, is like a dream and the treasures of the world are an alluring mirage. Like the apparent distances in a picture, things have no reality in themselves but are like the haze of heat.”~ Siddhartha Gautama

Buddha is actually a title more than it is a name. To obtain the title of Buddha one must achieve enlightenment, or become awakened from the slumber of the ordinary life which holds all of the world’s living creatures: survival, material gain, the pursuit of happiness, and pleasure. 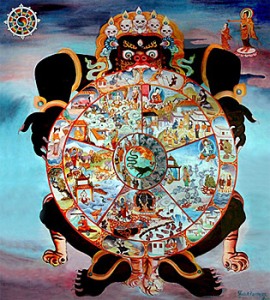 The Wheel of Life, held by a demon, with the Buddha standing free on the outside~Source: http://www.indianetzone.com

Hinduism has always held to the belief of reincarnation, and Karma. The basic belief is that how you live your life now will determine what condition your life will be the next time around based on your Karma levels. If you build up good Karma, you’ll come back as something good, like a human–maybe even a rich white man!–or perhaps even a god. Build up bad Karma, and you’ll come back as a rat living in the sewer, fated to live your life eating human feces.

The religion of Buddhism appears to be an offshoot of Hinduism in that it offers a way for people to be freed from the cruel Wheel of Life. In order for one to be free from the Wheel they must break free from that which binds them to the wheel–namely the pursuits of the material life. As one pursues what this physical world has to offer, what negative emotions and mindsets take hold in one’s life? Greed, Lust, and Hatred–the very things which bind one to the wheel, cause one’s suffering, and result in one’s eventual death. Buddhism is the path one takes to be free from the desire to pursue what this world has to offer. The path is one of self denial, self discipline, and self determination (the wimpy American version of Buddhism would add self discovery to that list but that addition comes from Hollywood, not true Buddhism–the self is just another delusion holding people back from enlightenment). The end result of this path is enlightenment, or Nirvana, and freedom from the Wheel. The first man to achieve Nirvana was Siddhartha Gautama–the first Buddha.

Siddhartha Gautama was born in about 560BC. He was born into a wealthy family, and grew up in an environment of luxury and ease. But as he grew older he began to be troubled by the things he saw around him and the yearnings and emotions he felt when looking at them. He would see a crippled old man, and feel despair at knowing that someday he too would be the same, and his wealth could not prevent it. He would hold his children with love, but be disturbed by the fact that his love for them would one day bring him pain through death and loss. He saw the people around him pursuing the same wealth he was born into, knowing that it was an empty pursuit as he himself was not free of the suffering that anyone else felt. Gautama was convinced that there must be a solution to this kind of life, a life of empty pleasures and pain, and he was determined to find it. He was convinced that he didn’t have to cure his suffering with more superficial pleasures. He was convinced that he could find the solution within himself, and that he did not need to seek the assistance of any of the gods, who were themselves trapped in the same fate he was. 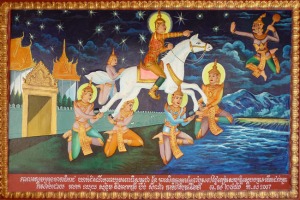 As the story goes Gautama decided to leave his father’s home, his wife and children, and his wealth all behind to find the truth which eluded so many people. He would find the truth and begin teaching it to others. He was determined not to fail. He tried living in various different ways–mainly having to do with self denial. At one point he starved himself to the degree where his ribs were showing, thinking that through self denial he could break free from material desire. He gave up that extremism when he realized that inflicting pain upon himself was bringing him no closer to the truth. He settled on a life of moderation–not too much, nor too little. He spent much time in meditation. He avoided anything which he believed would bring negative emotion into his life, and not only that, but would strive to do those things which were opposite of that which he avoided–for example: he wouldn’t just not lie, he would make it a point to speak positive things; he wouldn’t just not steal, but make it a point to bless others. He developed a system in his life where he did not pursue material wealth, nor poverty, but rather a moderate life where his potential might never be stunted by worldly pleasures or sufferings–he called this the “Middle Way”.

Eventually Gautama found the enlightenment he was looking for. He summed up existence into “Four Noble Truths”:
1. The human life is one of suffering.
2. This suffering is caused by desire.
3. Nirvana is the way out of this predicament.
4. The path to Nirvana is comprised of the “Noble Eight-fold Path”…
Wisdom–(i) Right View (ii) Right Intentions;
Morality–(iii) Right Speech (iv) Right Action (v) Right Livelihood;
Meditation–(vi) Right Effort (vii) Right Concentration (vii) Right Mindfulness.

So that’s a very brief explanation of the theory behind Buddhism…but is it the reality?

Are the people who call themselves Buddhists, living in Buddhist countries (like Cambodia), really living like this?

Well, perhaps I’ll try to answer those questions in a future blog-post… 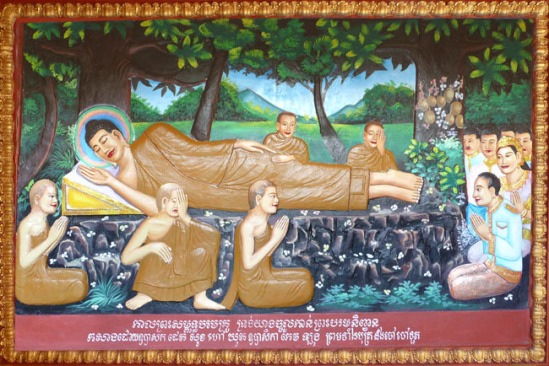 Most of the info I wrote here I learned from this book: Buddha by Karen Armstrong.