“And behold, there was a great earthquake; for an angel of the Lord descended from heaven, and came and rolled back the stone from the door, and sat on it. His countenance was like lightning, and his clothing as white as snow. And the guards shook for fear of him, and became like dead men.”~Matthew 28:2-4(NKJV) 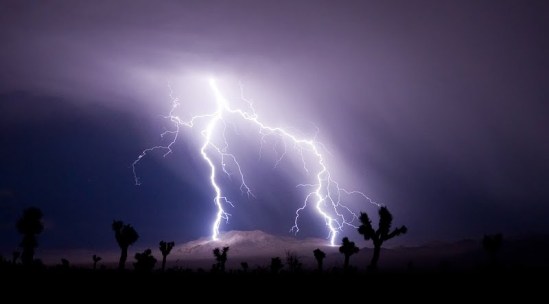 In the past I would always cringe every time the worship leader in church would say something like:

“Come on people! Worship! You’re going to be singing and worshiping in Heaven for all eternity, so you need to get it right now!”

And I, not knowing any better, would think:

“You mean I have to sing the same five sappy “Hillsong” songs, over and over, about how Jesus is my boyfriend, for the next billion years?!”

But I love the passage above–“His countenance was like lightning…” When ever lightning flashes you only get to see it for a brief moment, but it is a fearful thing to see! It is also very beautiful to see, and you want to see more. This was just an angel being described here. So imagine being in Heaven, in the presence of God, seeing all of His beauty, glory, and power. You will be terrified and overcome with joy both at the same time. You will tremble in fear at seeing the power of God, but you will not be able to take your eyes off of Him because of His infinite beauty. The sounds of worship that will rise from your soul will come forth without any effort–you just won’t be able to stay silent!

Below is an excerpt from C.S. Lewis’s final novel before he died called “Till We Have Faces”. Here he describes the main character having an encounter with a supernatural being. Lewis is not trying to describe God or Jesus here–he is just trying to describe what it would be like to be in the presence of a powerful supernatural person. It’s very cool. Give it a read!

“Then the stillness broke. The great voice, which rose up from somewhere close to the light, went through my whole body in such a swift wave of terror that it blotted out even the pain in my arm. It was no ugly sound; even in its implacable sternness it was golden. My terror was the salute that mortal flesh gives to immortal things. And after — barely after— the strong soaring of its incomprehensible speech, came the sound of weeping. I think (if those old words have a meaning) my heart broke then. But neither the immortal sound nor the tears of her who wept lasted for more than two heartbeats. Heartbeats, I say; but I think my heart did not beat till they were over.

A great flash laid the valley bare to my eyes. Then it thundered as if the sky broke in two, straight above my head. Lightnings, thick-following one another, pricked the valley, left, right, near and far, everywhere. Each flash showed falling trees; the imagined pillars of Psyche’s house were going down. They seemed to fall silently, for the thunder hid their crashing. But there was another noise it could not hide. Somewhere away on my left the walls of the Mountain itself were breaking. I saw (or I thought I saw) fragments of rock hurled about and striking on other rocks and rising into the air again like a child’s ball that bounces. The river rose, so quickly that I was overtaken by its rush before I could stumble back from it, wet to my middle; but that made little odds, for with the storm there had come a tyrannous pelting rain. Hair and clothes were already a mere sponge.

But, beaten and blinded though I was, I took these things for a good sign. They showed (so it seemed to me) that I was right. Psyche had roused some dreadful thing and these were its ragings. It had waked, she had not hidden her light soon enough; or else— yes, that was most likely— it had only feigned to be sleeping; it might be a thing that never needed sleep. It might, no doubt, destroy both her and me. But she would know. She would, at worst, die undeceived, disenchanted, reconciled to me. Even now, we might escape. Failing that, we could die together. I rose up, bent double under the battery of the rain, to cross the stream.

I believe I could never have crossed it— the deep, foaming death-race it had now become— even if I had been left free to try. I was not left free. There came as if it were a lightning that endured. That is, the look of it was the look of lightning, pale, dazzling, without warmth or comfort, showing each smallest thing with fierce distinctness, but it did not go away. This great light stood over me as still as a candle burning in a curtained and shuttered room. In the center of the light was something like a man. It is strange that I cannot tell you its size. Its face was far above me, yet memory does not show the shape as a giant’s. And I do not know whether it stood, or seemed to stand, on the far side of the water or on the water itself.

Though this light stood motionless, my glimpse of the face was as swift as a true flash of lightning. I could not bear it for longer. Not my eyes only, but my heart and blood and very brain were too weak for that. A monster — the Shadowbrute that I and all Glome had imagined— would have subdued me less than the beauty this face wore. And I think anger (what men call anger) would have been more supportable than the passionless and measureless rejection with which it looked upon me. Though my body crouched where I could almost have touched his feet, his eyes seemed to send me from him to an endless distance. He rejected, denied, answered, and (worst of all) he knew, all I had thought, done or been. A Greek verse says that even the gods cannot change the past. But is this true? He made it to be as if, from the beginning, I had known that Psyche’s lover was a god, and as if all my doublings, fears, guessings, debatings, questionings of Bardia, questionings of the Fox, all the rummage and business of it, had been trumped-up foolery, dust blown in my own eyes by myself. You, who, read my book, judge. Was it so? Or, at least, had it been so in the very past, before this god changed the past? And if they can indeed change the past, why do they never do so in mercy?

The thunder had ceased, I think, the moment the still light came. There was great silence when the god spoke to me. And as there was no anger (what men call anger) in his face, so there was none in his voice. It was unmoved and sweet; like a bird singing on the branch above a hanged man.”