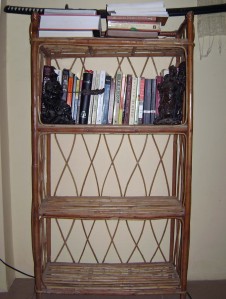 I think a good father will always go out of his way to find ways to say “Yes” to his children, instead of too often having to say “No”.

What I mean by that is a good father will try his best to place boundaries around his children so that within those boundaries he can say yes to almost anything. The other option would be for him to set no boundaries, and then constantly be saying no to almost everything.

I remove the books off the lower shelves of the book shelf–not to restrict my son, but rather give him freedom to play near the book shelf. I can say yes to him when he wants to stand and hold on to the shelf.

The boundaries God places in our lives are not there so that He can say no. He would rather say yes, and so He gives us a boundary in which to live.

And the great thing is that the boundary He gives us is not a list of rules which we have to keep, or else (Jesus took care of the “or else” on the cross). The boundary is a new spirit, being filled with the Holy Spirit, and being conformed to the image of Christ. This boundary keeps us from sin, and gives us a freedom greater than we can possibly imagine. And God gets glory from that. God gets the glory, we get the joy.

“God is most glorified in us when we are most satisfied in Him.” ~John Piper