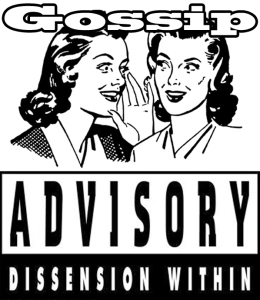 gos·sip
Noun:
Casual or unconstrained conversation or reports about other people, typically involving details that are not confirmed as being true.

I remember a few years back starting a new job at a fairly large construction company. I was already a fully licensed electrician but the owners had me work along side some long-time employees so that I could learn the ropes as to how things ran at this particular company.

After a time I was given my own work truck, my own helper, and my own jobs–I no longer had to work with these guys. Five years later we hit a slow period and the owners put different crews together on the same jobs to keep everyone working. Once again I was working along side these gossipers. It was a shock to me to hear them still having the same conversations, still bashing each other behind their backs, still with the same complaints about the owners. After five years nothing had changed! Actually there was one noticeable change–all of them had more grey hair. I remember thinking, “These guys are stuck in kind of hell”.

I myself am guilty of gossip. If you are guilty too you know that gossip can be quite addicting. There’s a bit of a rush in sharing or receiving information (true or not) about someone that allows you to look down on them and feel better about yourself. It’s like a little fix of “pseudo self-esteem”. But like all addictions, if you find yourself stuck in it you have to do the same thing, in higher doses each time, over and over again, until one day you realize five years have gone by and your life still sucks, your co-workers are still idiots, and your boss is still incompetent–nothing’s changed!

These days I have a quick cure for gossip. If anyone comes to me and begins gossiping about someone I quickly say something positive about the person being gossiped about. This kills the desire in me to hear the gossip, and it also kills the desire in the gossiper. In fact I’ve noticed that when I say something positive the gossiper stops speaking, shakes his/her head a little, blinks his/her eyes a little, and then also begins to speak positive about the person. It works every time.

Think about the Trinity. The Father, the Son, and the Holy Spirit living in perfect unity. The Father and the Son aren’t bashing the Holy Spirit when He’s not around. It’s perfect selfless relationship. One Member lives to serve the Others. No member of the Trinity has to bring down the Others in order to build Himself up. Authority is recognized and respected in the Trinity. The Son, although equal with the Father, submits to the Father, and it’s His greatest pleasure to do so.

We humans have to deal with sin so we can not yet have this perfect unity. But because of the person and work of Christ, and the Holy Spirit living within us, we can live according to the same principle that the Trinity does: selfless service and recognition of/submission to authority.

Do not let gossip and dissension enter into your team! Kill it before it takes root. Let the Trinity be your example and let God’s grace enable you to enjoy unity.

Related article: “Forget About Yourself”